Near the corner of Colorado and Bayshore in the quiet Midtown neighborhood of Palo Alto, a literal stone’s throw over the fence from the bustling north/south conveyance that is the interstate 101 freeway, lies a sunken treasure seemingly lost in time. The Palo Alto Skatepark, known also as Greer Park, and more affectionately by the locals simply as The Bowls, was built in 1990. Probably the first public concrete park built in California since the original skatepark boom in the late ‘70s, it can be said that Greer was at the forefront of the park resurgence that spilled all over the state, country and world in the years that followed it’s appearance. However, “modern” is certainly not a word any skater would ever associate with Greer. Not a ledge, manual, hubba, rail, pyramid, bank, stair set, flat bar, or Euro gap to be seen. Nothing sticks up beyond ground level; it’s all negative space. The rough concrete surface combined with decade after decade of endless layers of legally and liberally applied spray paint make it feel like skating the surface of the moon now. There’s not even any coping and only one grind-able object: the steep oval volcano that sits right in the middle of it all. This lumpy three-leaf clover of amorphous and mismatched transitions and humps looks like some massive artifact or relic from an era long gone. Maybe that has something to do with where it sits, in a public park named for a man from another time…

There’s not even any coping and only one grind-able object: the steep oval volcano that sits right in the middle of it all.

Captain John Lucas Greer, an Irish seafarer, was born in 1808. He worked the coasts of South Africa for several decades before sailing the good ship Wild Duck into the San Francisco Bay in 1849. While his men headed for the Sierra hills in search of gold, he shoved off in a small skiff to explore the southern part of the bay, sailing up San Francisquito Creek and settling the area. He was one of the first residents of what is now known as Palo Alto.

History lessons aside, Greer does have great history. Being that it was the first skatepark anywhere in the area at that time, it was literally flooded with skaters even before it officially opened. Some of the Bay Area’s all-time greats put in work at the bowls in those early years. Looking back at the first bits of coverage there, it hardly looks like the same place. The smooth, bare concrete contours scarcely resemble the multi-colored patchy walls that stand now. Soon enough, the first wave of graffiti hit the bowls, including such gems as Team Yahtzee, the massive pentagram, and the all-time winner, “Eat Out A Bag Lady.” Watch the magic moves of guys like Jason Adams, Salman Agah, Tim Brauch, Chris Senn, Cab, Paul Zuanich, and, as Transworld captioned him, “a guy named Phil” and it’s easy to see that the early days of the bowls were pretty magical. And they really were. You just had to be really good or go really early to enjoy the place. The crowd came early and stayed all day, and most hours of the day the park was ran through by a seemingly endless train of older dudes pumping through and flying out in a line, calling out “Big Bowl!,” “Little Bowl!,” and “Volcano!” as they slarshed around. As a wee lad, my friends at I could not hang with that, so we would go early to skate. Real early. I’d have the homies spend the night the day before and my dad would truck us over at 6:30 in the morning. We have footage of us rolling around, doing a few lip tricks in the little bowl, and trying to hit the hips as the sun was rising, no joke. An hour later and there’d be a dozen people there already. Mid-day, 50. It was the hot spot. Eventually they even had to install a tent for a city-hired pad nanny/enforcer to watch over the place it was getting so much traffic all day.

Over time, the heavier locals began to identify themselves. Guys like Jeff “Ffej” Hedges and Pete “The Ox” Culpits shredded the bowls like nobody’s business, and later Tim McKenney, too. Pete especially did things nobody else even thought of, like air-out to knee slide across the volcano, jump back in on his board. He also looked like he might throw an elbow or two pumping through the corners if you got in his way, which few dared to do. Also a few myths about what visiting pros did, which while remaining unsubstantiated to my knowledge, certainly motivated the scene. Did Natas really ollie the flat gap across the entrance to the Little Bowls? Did Chris Miller really transfer over The Tits into the big bowl way early on? Who knows, but it got your mind going about the possibilities at the park.

The guy who seemed most motivated by the park and who did more damage there than anybody else, by a good stretch, was that guy named Phil. Philip Alan Shao. From day one until the day he died, Phil owned Greer. There was no touching him. He did tricks there that will probably never be done again, and he made it look like nothing. The place just worked for him. Backside ollie from the Big Bowl to the Volcano? Impossible. Frontside air The Tits? How do you even find the line? Noseblunt slide the volcano 20 years ago? Yeah right! Head high airs, kickflip grabs, double flips, whatever you want into the Little Bowl? He murked it before murking it was even a term. They might as well rename the place for him. Greer stands in eternal vigil for the memory of Phil Shao, and he will forever be the king of the bowls. RIP, brother Phil. You are not forgotten.

The guy who seemed most motivated by the park and who did more damage there than anybody else, by a good stretch, was that guy named Phil.

In the summers, Greer was always a good destination for an evening session or a bbq. One of my all-time favorite memories, not just in terms of Greer, or even skating, but just life in general, was the day that we started a bbq in the pits near the bowls and Dave Rosenberg showed up with a backpack on, opened it up and withdrew a huge hunk of raw beef in a gallon-size zip lock bag filled with some home-made unidentifiable liquid, and then proclaimed proudly with a huge smile on his face that he had been marinating it in his backpack for two days. Dave, I love you! But those sunset sessions with grub, drinks and the crew in the mid-90s are the kind of thing that you can say life is all about, and Greer gave it to us.

On the other hand, Greer is one cruel mistress. “Fuck around, lay around” has never been truer that it is down in those trannies. If you have ever slammed or seen somebody slam in there, you know how vicious it can be. The spirit of Greer just reaches up out of those cement waves and shit-whips you like nothing if you are out of line. Because Greer is generally just fun to cruise and go fast in, sometimes you get carried away and forget. Personally, my best reminder was when I continued to skate a cruiser board at full speed after it had begun raining. Coming out of the fly-out section and rolling in backside into the big bowl, I over-rotated and slid out on the slippery wet paint, and was sent blindly from near the top to the flat, directly on my back. It took awhile to crawl out of the bowl in the rain that afternoon, and I can still see MJ on the deck laughing and covering his mouth, saying “Oh my god!” as I lay writhing. I can imagine how funny it was to watch, though. One second, woohoo! The next, not woohoo.

The spirit of Greer just reaches up out of those cement waves and shit-whips you like nothing if you are out of line. Because Greer is generally just fun to cruise and go fast in, sometimes you get carried away and forget.

Before wrapping up, I gotta take a minute to shout out Mike Matilainen in the light of Greer. Mike was there with me for those 6:30 am sessions when we could barely roll back and forth, street skater kids having their first real skatepark experience. But over the years, Mike put in the work and the hours and turned himself into one of the best skaters ever to grace the place. Mike cut his transitional teeth at Greer, and it is because he did it there that he became as good as he did on every other normal curved surface he rolled on. Kudos, old friend. I know you also did it for Phil. I was always so impressed watching you rip it up at Greer.

In 2013, there it still stands, or sinks. Timeless. Unphased by the passing years. Yes, the slick paint is inches thick now; yes the pitted holes in it are real; yes, BMXers basically own it now; but for those who want to test out what it is to get straight-up gnar or just have a blast going fast, Greer awaits. Get some. 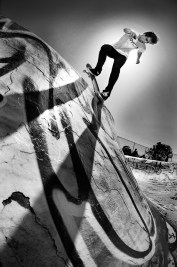 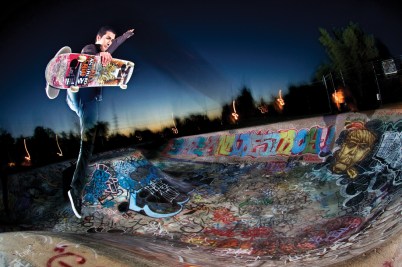 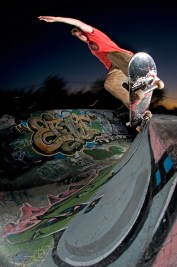 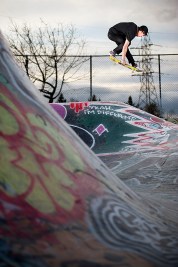 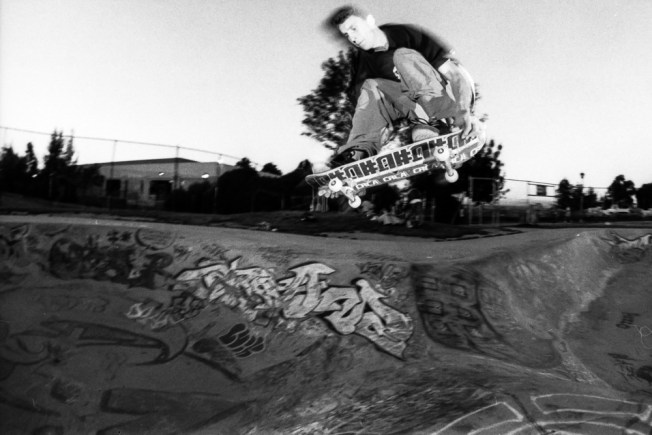 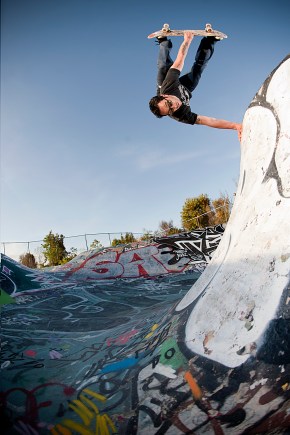 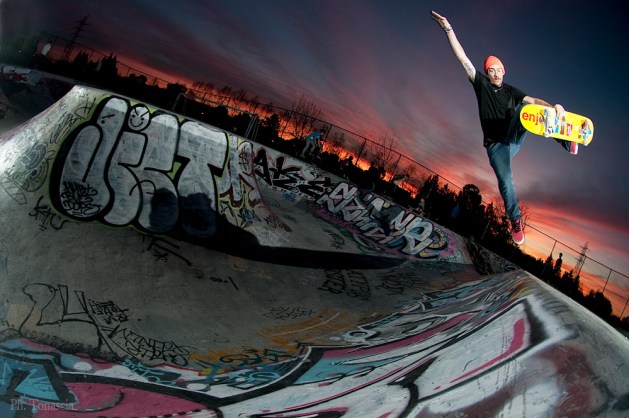 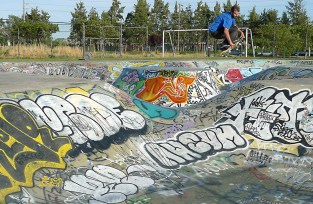 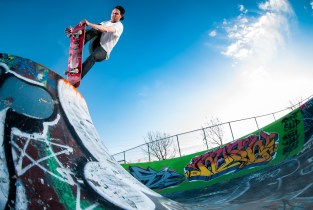 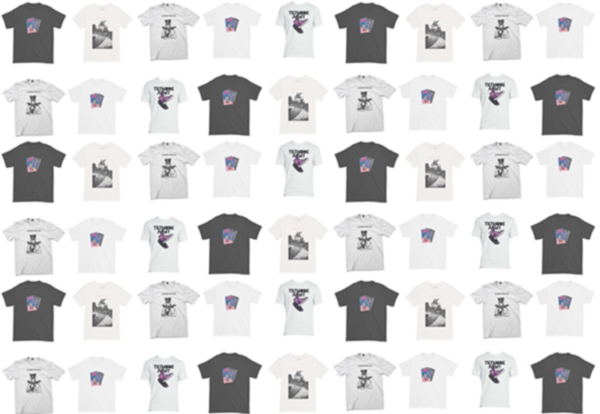